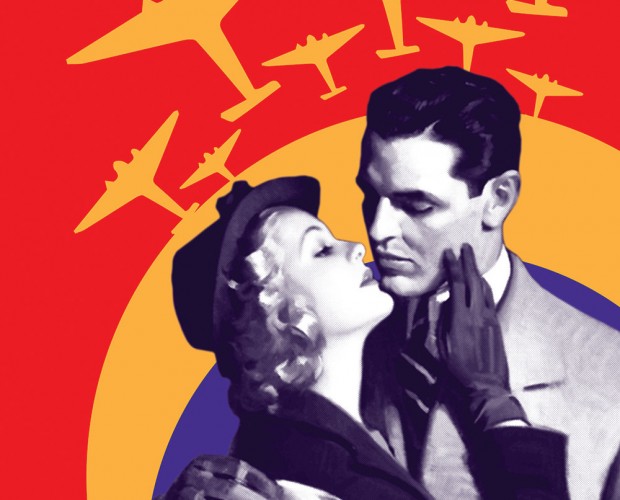 Prefer to listen to me instead?

I will remember for the rest of my life our tune to the “Bandera Rosa!”, played at the beginning of the show. This song set the scene for a play that zipped along the horizon of Madrid in the grips of civil war.

It would be the second time I was to be directed by the incomparable Tricia Thorns and produced by the steadfast Graham Cowley. Because of this, it was with an attitude of calm that I entered the first day of rehearsal knowing that we were in safe hands.

The first week of rehearsals were in a space just off the Thames in southeast London, close to Bermondsy, called The Sands Films Studios. This veritable labyrinth of a building reminded me of an old England, lost in school boy memories. Its sweet little cafe complete with red and white checked table clothes was only the reception to what was a maze costume and theatre oddity. I was definitely not want for distractable material!

After the 1st blustering week, complete with terrible German accent attempts and multiple changing room sojourns – my character did not appear until the second half which left me with a lot of spare time this week – we moved to the a new base of operations at the Out of Joint offices where Graham also works when he is not avidly promoting Two’s Company. It was here I had the pleasure of seeing consummate theatre legend, Max Stafford Clark, make his way in and out on his office. There to plan and create more magic to enthrall theatre goers across the country. I only wish I had the courage to go up and speak to him… maybe next time.

We quickly had lines down and the play on its feet. I shudder to think now that at the time I was going through quite the fitness frenzy and during the breaks my colleagues would see doing press ups, sit ups and all manner of physical jerks for no particular reason save burning excess energy. I quickly made new friends in Michael Shelford and Sasha Frost and rekindled old ones in the form of James El-Sharawy and Steven Ventura. It was a large cast and so I never lacked for a friendly face to talk and joke around with until it was time for the second half.

My character Max was a tortured, undercover operative and had the facial scars to prove it! This posed some obvious problems and it wasn’t until the last week of rehearsals that I addressed it at which point there was little time to deal with such a fuss; a mistake I will not willingly make a second time! As usual Graham and Trica were there to save the day and quickly sent me packing to that historical bastion of theatrical make-up that is Charles Fox in Covent Garden. Within two hours I was ready to go, complete with horrible facial deconstruction!

From then on it was plain sailing with Hemmingway at the helm! I would arrive at the Southwark playhouse, lock my up my ragged bike and on my way up to the changing rooms grab a latte at the bar for good measure. It was no time to dawdle however as the half was about to be called and I was needed on stage in full costume for the fight call. I would throw on my military garb in haste and speed down to the stage where the ever patient, ever understanding stage manager, Remi Smith, would be waiting with a large knife and grenade in his hands. 10 minutes later, after a quick knifing, I was all set up in the very back corner of the dressing room, where no less than 12 of us had to get ready every evening, and twice on Saturday. Sitting next to me was Elliot Brett, a newbie to the world of professional theatre but a seasoned thesp none the less. It was here I would spend the first half of the show doing my best “Freddy Krueger” make up on half my face and chatting with Elliott, Sasha and other ladies in the cast, divided, for decency, by a wall of pigeonholes.

Then it was on to the second half and the “ritual of the mud”… I can’t tell you how many people I aggravated and bemused on my insistence I used real mud for the part of Max! From actors to stage managers, directors to costume makers I felt the full force of animosity most pungent on my Brando-like antics! I did not regret it however (although I did wish I was more considerate to everyone else’s needs) and every night, after 50 press ups, I plunged my hands into a bucket of brown goo and rubbed it all over myself; it was like being 5 years old again.

And so I would throw myself on to the stage, muddied and bedraggled, ready for a new night of thrilling civil war capers. Before I knew it the month was over and I was cleaning up my huge make up station.

It was a thrilling ride that made me a better actor in more ways than one, although I did not accomplish all the goals I sought at the start of the production, my understanding of theatre and ensemble work deepened profoundly, even if I might not have thought it immediately after the show. Looking back I am sad I concentrated so hard my “issues” in this production which stopped me from engaging fully in such a vibrant company, so full of colour and friendship. It is a pleasure however to remember this show so vividly for people involved in it.